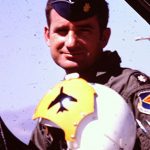 General Hermes was born in 1937, in Pontiac, Mich., and graduated from Columbia High School, Maplewood, N.J., in 1955. He earned a bachelor of arts degree in geology from Cornell University in June 1960 and a master’s degree in public administration from Auburn University in 1980. The general completed the Industrial College of the Armed Forces in 1971, Air Command and Staff College in 1973, and Air War College in 1980.

He was commissioned through the Air Force Reserve Officer Training Corps program and received pilot training at Moore and Laredo Air Force bases, Texas, earning wings in September 1961. After advanced training he was assigned as an F-100 pilot with the 522nd Tactical Fighter Squadron, Cannon Air Force Base, N.M., in October 1962.

General Hermes transferred to Luke Air Force Base, Ariz., in November 1969 and served as an instructor pilot, first in F-100s and, later, in A-7Ds. From August 1971 to December 1973 he was an A-7D instructor pilot and flight commander with the 333rd Tactical Fighter Training Squadron and, subsequently, with the 357th Tactical Fighter Squadron, both at Davis-Monthan Air Force Base, Ariz.

Ejection number 1, 1110 MST, Monday, 17 May 1962, F-100C 54-2033.
I was a 1/Lt student in the 4515th CCTS at Luke, flying number three position in a four-ship nuke weapons delivery mission led by “Diamond,” aka Capt. Ron Johnson. On the Range #1 run-in for my third delivery, stabilized at 500 ft AGL, 500 KIAS, I experienced a sudden deceleration, accompanied by the sound of a turbine winding down somewhere not far below and behind. Keen perception based on excellent training prompted the garbled scream, “flameout” and zoom to 7,000 feet. Several airstarts were attempted – no fuel flow, no light, no dice.

Both Captain Johnson and the range officer, Capt. Dave Duarte called for ejection at 2,000 feet AGL. Did that. It was surprisingly windy at 220 KIAS and the ballistic seat ride was pretty violent. But all of the gear worked as designed and I enjoyed a quiet ride to a soft landing somewhere beyond the nuke circle. Pick up by Pedro helicopter was followed by an hour or so in the Luke dispensary, then a TR-X mission on Tuesday with “Peso,” aka don’t recall. Findings: Most probably cause was malfunction of the main fuel shutoff valve, which was found in the 90 percent closed position. Possible cause was materiel failure of the diaphragm seal assembly in the engine-driven fuel pump. Parts shipped to OCAMA for priority TDR were lost in transit.

In an augmented 522nd TFS, Cannon AFB, I had been TDY to Southeast Asia for several months following the famed “Gulf of Tonkin Crisis.” First sent to Clark AB, we later manned a detachment at Takhli RTAFB, then formed up for a wet two months or so at Danang AB. There we flew mostly combat support missions escorting RB-47s and RC-130s along the coast of North Vietnam, and, rarely, RF-101 escort over Laos. Finally ordered back home in late November, I was scheduled as #4 in a five-ship (Ming 01) led by Captain Don Murgatroyd, headed initially back to Clark. (As an aside, I’d removed two ammo cans from ‘ole 551 and replaced them with almost everything I owned, including lots of booty purchased in Hong Kong during an R&R.)

Upon arrival at Clark, the returning heroes lined up with the runway in an arrowhead formation at 1,000 ft AGL 350 KIAS. I was fat, dumb, and happy in trail with lead, #5, Arnie Clark, in trail with me. We were maybe a mile short of the runway when a noticeable loss of thrust and sound of a turbine winding down somewhere just below and behind led me to conclude that, thanks to keen perception, excellent training and past experience, I’d flamed out.

Several airstart attempts, no light, no fuel flow (again), led to ejection quite low, AGL-wise, and slow. No wind, a nice push from the rocket seat, a tumble, and a sugarcane field racing up to meet me prompted a throw-away yank at my “D” ring. A short, sweet descent to a soft landing, then a few minutes entertaining some students from a nearby grammar school were followed by ground transportation back to Clark. Findings: “Flameout due to fuel starvation from an unknown cause” (possibly) “failure of the engine-driven fuel pump or failure of fuel control” (I had selected emergency fuel as per the boldface), and that was it.

Maybe everyone was busy screwing up the new war, but the accident board, composed of one F-100 jock and several Base Flight straphangers was not Clark’s first team. The seat, kit and kaboodle had been carried off by the locals, then sold back to the USAF, sans belt and harness, so it was never determined why the automatic system didn’t perform ( the Board concluded that I hadn’t hooked my zero lanyard – wrong!). They also got all fired up over the three-ship formation takeoff we’d made out of Da Nang.
-Hal Hermes