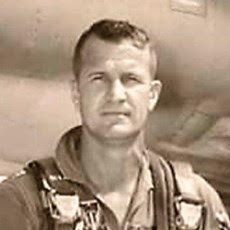 SSS Member Ray G. Thompson, 84 headed west February 18, 2017, surrounded by his three loving children. He was born in Rayville, LA, to Rowe and Gladys Thompson and played football at Tulane University and upon his graduation began his service to our nation in the United States Air Force. He was a decorated F-100 pilot and career military officer, among other accomplishments having served as an instructor at the United States Air Force Academy, and served in the Pentagon and the State Department, and concluded his career as Commandant of the USAF ROTC at Louisiana State University, Baton Rouge.

After his military career he returned to Jena, Louisiana and enjoyed his second career as an executive at Justiss Oil Company before retiring to Bossier City in 1999. While in Bossier he was an active member of Cypress Baptist Church and was an accomplished genealogist, fisherman, and lifelong patriot.

Ray inspired all who knew him throughout his military and civilian life, as a coach, flight instructor, professor, mentor, speaker, role model, friend, and parent.

Ray eloped with the love of his life, Rita Doughty and they were married for 63 years before her passing in 2016. They have three children; seven grandchildren, and six great-grandchildren and counting. In addition to his loving wife and parents, he was predeceased by his sister, Bobbie Wynn and his brother Neal Thompson. He is survived by his daughter, Starla and her husband Dr. Scott Lawrence of Tyler, TX; and his sons Ray G. Thompson, Jr., and his wife Jenna of Houston, TX; and Judge Jeff Thompson and his wife, Toni of Benton, LA.