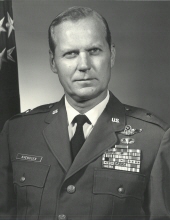 Major General LeRoy W. (Swede) Svendsen, Jr. died on the 14th day of February at the age of 93.  He has been nominated as an Honorary Member of the Super Sabre Society for his storied career flying fighter aircraft and 230 logged combat missions in 2 wars.

Swede was born in Chicago on the 26th of December 1928 into a working-class family and grew up in the Great Depression. Times were tough on the adults, but the children never seemed to realize the economic impact, there was plenty of love in that big family. Grandparents, two of their married children and three grandchildren lived in the same home – there was never any thought about asking for government help.

Swede was approaching his 13th birthday when the Japanese attacked Pearl Harbor. He tried to join the Marine Corps at age 14, but his parents would not give their permission. At age 15 his parents finally agreed, and he enlisted in the Navy as an aerial gunner and radio operator. His mates had trouble with the name Svendsen, so they called him “the Swede”. From that day forth he was known as Swede Svendsen. He was honorably discharged from the US Navy 11 June 1946 after WWII ended. He returned to high school, finishing two years in one semester and completing two years of college in one semester taking end of course exams, most based on training schools he attended in the Navy. 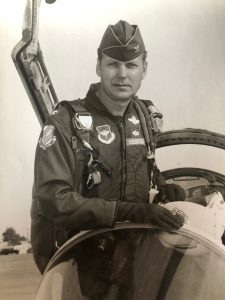 Since grammar school, Swede always wanted to be a fighter pilot. When the US Army Aviation Cadet program opened back up after the war, he joined up in 1947. Flight training began February 1948 at Randolph Field; where he completed Primary and Basic pilot training. Before completing the training, the US Air Force became the new branch for fliers. By 21 years of age he had served his country in the US Navy, US Army, and began a long career in the USAF. He received advanced pilot training at the Fighter School at Williams AFB, AZ, graduating as a Second Lieutenant in February 1949. His first assignment was to the 4th Fighter Group at Langley, AFB, VA, flying F-80’s and then F-86’s.

When the Korean War broke out (June 25th, 1950), he was among the first volunteers to deploy for two combat tours – one with the 25th Infantry Division, 35th Infantry Regiment as a Forward Air Controller and as commander of a Tactical Air Control Party (TACP) during the perimeter campaign in August of 1950.

While in Japan TDY for 3 months, he requested assignment back to his squadron at K- 2 Korea. Major Ben King was the commander who approved the re-assignment. He returned to the 8th Fighter Squadron, 59th Fighter Group, flying F-80C fighter bombers (114 missions) in attacks deep into North Korea, stemming the flow of enemy – Chinese and North Korean forces and equipment. Losses were heavy in the fighter bomber business, and half of his squadron was lost in four months.

He joined Air Force Special Operations shortly after it was formed (1962) Hurlburt Field, Fl. All were volunteers, and he deployed to South Vietnam early in 1963 as commander 6th Fighter Sq, 1st Air Commando Wing in 1963/4 and ran a classified commando operation prior to the introduction of general-purpose forces. He flew the AT-28 fighter bomber (about 100 missions) in sanitized civilian gear and operated with US Army Special Forces on the ground in various war zones. He was also responsible for employment of B-26, A-1E, C-46, C-47, U-10, and Palatus Porter assets. On his second tour in Southeast Asia, Swede was chief of Project 404 in Laos, meaning he managed all USAF programs in country-a covert operation! After this, he completed college and graduated from Florida State University in 1965.

Swede served five years in the Special Operations Command and in 1969 was one of first inductees into the Air Commando Hall of Fame.

Swede would return to Southeast Asia in the closing weeks of our withdrawal from Vietnam in April 1975 as a Brigadier General and Deputy to the US Army commander of residual forces in charge of evacuations. When surrounded by about 15 North Vietnamese Divisions, he personally set about to destroy Bien Hoa, which had the capability of building US-1 “Huey” helicopters and other sophisticated military equipment. As Bien Hoa went up in flames, he set a plan to destroy Long Bin, a supply base of the ARVN, the following day. He evacuated by Air America Helicopter that evening to the command ship, Blueridge, off the coast of Vietnam.

Swede served at the Pentagon, 1966-70, first as a plans officer in Warfare Division, Directorate of Plans, Headquarters U.S. Air Force, and later in the Office of the Secretary of the Air Force as liaison officer for the U.S. House of Representatives. In 1968 he volunteered to pilot the historically famous Pima Paisano B-24 from the desert of Puna, India to the Tucson Air Museum, Arizona. 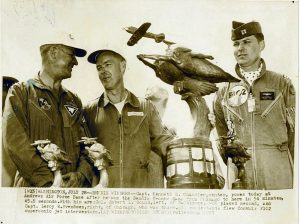 Swede was appointed Major General in 1974, and in 1975 was on his way to Egypt as defense attaché, U.S. Embassy in Cairo. He served in that capacity until he assumed his final assignment to Randolph Air Force Base, TX. There he served in dual capacity as assistant deputy chief of staff, Manpower, and Personnel Center for Military Personnel Headquarters U.S. Air Force, and commander, Air Force Manpower and Personnel Center, Randolph Air Force Base, TX. Swede retired from the US Air Force May 1980.

Swede was a command pilot with more than 6,000 flying hours, mostly in fighter aircraft, and an airborne parachutist. He flew over 230 logged combat missions in 2 wars. Many other missions were not logged due to their covert nature.

A service will take place at Arlington National Cemetery at a later date.