Today in History – May 4, 1949 – F-82F crashes into house, pilot uses brick to rescue crewman from cockpit

4 May 1949 – USAF North American F-82F Twin Mustang, 46-468, out of Mitchel Field crashes into an unfinished house on Fulton Avenue near Duncan Road, a residential neighborhood of Hempstead, New York near Hofstra University; the plane burst into flames but neither the pilot, 2nd Lt. Andrew Wallace, nor his radar observer, 1st Lt. Bryan Jolley, were killed. In fact, Wallace used a brick from the house to smash the right canopy and rescue Jolley. (1)

“Observers said the twin-fuselage interceptor failed to gain sufficient speed to clear the fence and the pilot in desperation pulled up the nose. The plane swung up, stalled then [dived] into the ground. As it fell, it hit the fence, spun in cartwheel fashion across Fulton Ave. The new home and office building of Joseph Wingerath brought the juggernaut to a halt on the other side of the street where it ended in a mass of twisted metal., then burst into flames… 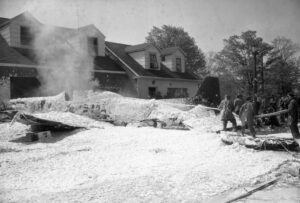 Wallace managed to scramble out of the wreckage as it burst into flames, but Jolley was trapped in the cockpit… Wallace acted with a cool head, hammering on the plexiglass canopy of his trapped companion with chunks of brick. Once the canopy was cracked he tore it wide open with his bare hands and helped Jolley out of range of flames that were already beginning to lick at the interior of the cockpit. 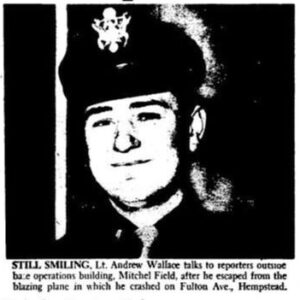 Lt. Wallace said he was either “the luckiest guy in the world – or the unluckiest”.Only ten days earlier Wallace had crashed in the same type plane – and walked away.” (2)

Both men survived the crash of May 4th.