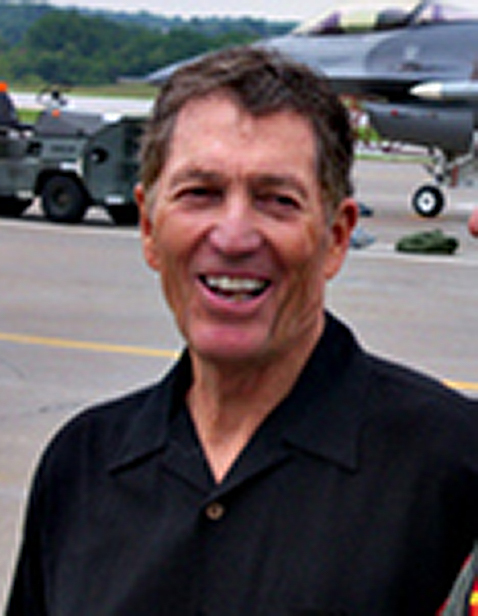 The story (from the Summer 2013 issue of the Intake) says that Keith “Herb” Acheson “had the misfortune of having his inexperienced Number 3 run into him during a flight in the F-100C.  Damage to Herb’s aircraft was extensive causing aircraft controllability to be at a premium when he attempted to slow to landing speed. The lowest airspeed where aircraft controllability was adequate was 250 KIAS. Having been endowed with the fastest airborne tricycle ever, Herb decided to try and land it. He flew the approach and landed at 250 KIAS, luckily [he] got a good drag chute (180 max) and stopped before having to take the barrier. Herb gets the title of “fastest landing speed in a Hun – 250K.” Note: Number three aircraft was class 26’d and they repaired Herb’s aircraft by replacing its aft section from the one from Number Three!

While he says he “never dropped a hostile bomb” he does admit to “strafing the hell out of the acoustic scorer at Smokey Hill and Hardwood Range”.

Col. Keith “Herb” Acheson (Ret.) commanded the124th Fighter Squadron Iowa National Guard from 1989 to 1991. An article on Father’s Day in 2013 in Radio Iowa tells of a Father/Son duo with lots of flight time. “…Keith Acheson of West Des Moines flew several different jets from 1968 through 1991. He says it was a surprise when his son Travis first told him he wanted to do the same around the time his son was a sophomore in college… his son, Travis Acheson, says he had been aware of what his dad did.” Travis said, “I can remember when he flew the F-100 and the A-7.”

Keith and his son have flown for a combined 50 years.

See the video of Keith and his son Travis at the 132nd Fighter Wing, Des Moines, Iowa at Keith’s video link. https://cyberspaceandtime.com/F-16_training_flights_at_Des_Moines’_132nd_Fighter_Wing/QFCfpsk_O-U.video

See the video of Keith and his son Travis at the 132nd Fighter Wing, Des Moines, Iowa

Saying Goodbye to the F-16 by WHOTV