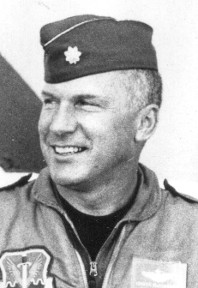 Charles “Chuck” William McClarren, Colonel, USAF retired headed west on Sunday, July 30, after a battle with Alzheimer’s. He was born on July 26, 1930, in Spencer, IN. He enlisted in the Air Force in 1950, and in 1952 he was accepted into Aviation Cadets and was awarded the Jet Flying Award when he graduated from Officer and Pilot Training. Chuck was commissioned as a 2nd Lieutenant and pilot. In 1954, he was assigned as a primary duty fighter pilot at England AFB in Louisiana where he was deployed to locations all over the world.

In 1958, Charles was chosen to attend the USAF Fighter Weapons Instructor Course at Nellis AFB, NV (the “Top Gun” school in its day) where he achieved “Top Gun” honors and was invited to be an instructor at the school. In 1961, he transferred to Japan as a flight commander in the 80th TFS, and in 1963 he was assigned as the Chief of the Wing Tactical Evaluation Team to supervise the wing’s conversion to the F105 Thunderchief Fighter Bomber.

Through his leadership efforts, he was awarded the Air Force Commendation Medal. After the Gulf of Tonkin incidents in 1964, on a second mission over Laos, Charles was escorting an RF-101 when it was shot down near the North Vietnam border. He remained over the bailout area while making suppressive attacks on the enemy and also organizing a successful rescue oper

ation. For his actions that day, he was awarded the Distinguished Flying Cross.

Charles flew over 100 combat missions in Vietnam. In late 1966, he headed an Air Force team to evaluate the A-7 at Naval Air Station Lemoore, CA and assisted making the aircraft carrier qualified. This resulted in an eight-month combat cruise on the USS Ranger in the Gulf of Tonkin where Charles completed over 120 carrier landings. Charles was promoted to Lt Colonel in 1970 and 14 months later to Colonel in 1971, and was assigned to the Pentagon and later attended the Air War College in AL in 1973.

Col McClarren’s next assignment was as Deputy Wing Commander of the famous Flying Tigers at England AFB in LA. He became Wing Commander after six months. In later years, Col McClarren was assigned to NATO and was a Liaison Officer for the RAF Strike Command in High Wycombe, England.

McClarren retired in 1983 after 33 years of service. He received a number of awards which include three Legions of Merit, 9 Air Medals, the Navy Meritorious Unit Commendation, 3 Navy Commendation medals with combat V’s, the AF Good Conduct medal, Armed Forces Expeditionary Medal and the Vietnam Service Medal with One Oak Leaf Cluster. His plaque from the RF-101 Squadron which thanks him for saving their pilot’s life ends with “May God fly with you always.”

Notwithstanding his successful military career, Charles’s greatest achievement was his role as a loving, devoted husband and father. While deployed to Aviano Air Base in Trieste, Italy, he met his future wife, Joyce, who preceded him in death in late 2016. Together they raised four children while being assigned to bases all over the world. Chuck is survived by his 2 sons, 2 daughters, 5 grandchildren, and 5 great-grandchildren.

Interment will be at Rhode Island Veteran’s Cemetery in Exeter, Rhode Island, with full military honors. The family respectfully requests donations be made to the Alzheimer’s Association