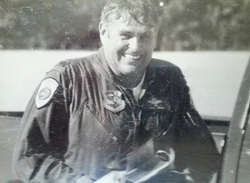 SSS member Col Jack Harris, USAF (Ret) headed west on March 11, 2017. Even as a young man, Jack’s first love was flying. After graduation from the University of Bridgeport, Jack joined the Air Force. He flew the F-100 in England, Germany, and Vietnam.

While in Vietnam Jack was an early F-100 Misty Pilot (Misty 10). These early missions were over North Vietnam and their attrition rate was heavy. Jack was also a member of the Super Sabre Society, dedicated to preserving the history of the F100.

Later he flew the FB-111 at Pease on a second tour in England.

Jack is survived by his wife Alison, two children Matthew Harris and Lindsay Harris Shapleigh and two grandchildren Michael Shapleigh age 3 and William Shapleigh age 1. Jack was a lover of sailing and skiing and will be greatly missed by his family.

Services: Memorial services to be announced in the coming weeks. In lieu of flowers, memorial contributions may be made to St. Jude Children’s Research Hospital, 501 St Jude Place Memphis, TN 38105