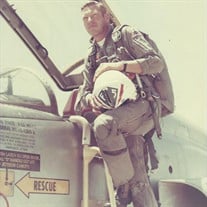 Leaving behind a legacy of love for his family and country. Our dad, “Grandpa Don” passed away peacefully with his two daughters Janet and Kirsten by his side. Don is also survived by his jokester son-in-laws Butch ( Janet ) and Tim ( Kirsten ). He is preceded in death by his beloved son David and his wife Jerry, his lover and best friend.

He continues a fun-filled legacy with six Grandchildren, ten Great-grandchildren and one more on the way! His service in the US Air Force is a great source of pride for all of us. As a fighter pilot, he achieved over 1000 hours of flying time in the F-5. In 1967-68 he served his country in Vietnam and was awarded several medals of distinct honor.

After twenty years of service, he retired a Major in 1971. He followed up his military career at Northrop Corporation traveling the world. An avid golfer, he served as the Los Verdes Mens Golf Club President and won the club Championship three times. In retirement, he enjoyed time with family in Colorado. Grandpa Don had an ability to perfect his many skills to the tee. As the patriarch of our family, he stood strong through difficult times. We are so proud of our dad and grandpa for the man he was. He lived a life full of fun, love, family, and friends. Love you Daddy!